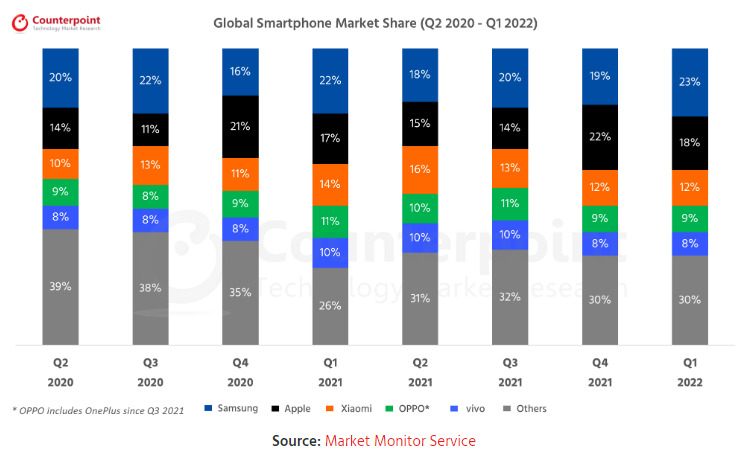 *OPPO includes OnePlus since Q3 2021
**Ranking is according to the latest quarter.

• The global smartphone market declined by 7% YoY and 12% QoQ to 328 million units in Q1 2022.
• While Samsung’s shipments declined 3% YoY, it was the only top-five smartphone brand to grow QoQ. Its market share rose to 23% from 19% last quarter, resulting in Samsung taking the top spot from Apple in Q1 2022.
• Apple’s shipments declined by 1% annually to reach 59 million units in Q1 2022. This was after an expected seasonal quarterly shipment decline of 28%.
• Xiaomi, OPPO* and vivo’s component struggles continued, causing a quarterly and annual decline in their respective shipments.

For our detailed research on the global smartphone market in Q1 2022, click here.

Why is the smartphone market declining in Q1 2022?

The global smartphone market declined by 7% YoY, shipping 328 million units in Q1 2022 caused by the ongoing component shortages, as well as COVID resurgence at the beginning of the quarter and the Russia-Ukraine war towards the end. The global smartphone market also, as expected, had a seasonal decline of 12% QoQ. The component supply crunch was felt more severely by major Chinese OEMs such as Xiaomi, OPPO* and vivo as compared with Samsung, which seems to have overcome component shortages that affected its supply last year, as evidenced by higher-than-expected growth in its shipments despite a late flagship launch.

Consequently, Samsung regained the top spot from Apple which had emerged as the biggest smartphone vendor globally in Q4 2021 thanks to its latest iPhone 13 series.

Which country has the highest market share of smartphones globally?

HONOR has emerged as the biggest smartphone player in China, chipping into vivo and OPPO*’s shares and stepping into the position previously held by Huawei from which it recently separated. Although vivo did not succeed in regaining the top position due to HONOR’s rise at a time when it is itself facing component shortages, it did recover somewhat thanks to its newly launched mid-end S12 series that is popular with younger customers and the affordable the Y series which showed strong performance in the quarter.